One of the challenges we face coming in to the new year is deciding whether or not to create the ever famous New Years Resolutions.

For years I tried NYR, but found they were always so vague and had no plan behind them. So I, like so many other resolutioners, would give up before I really ever got started. So in 2014 I changed tactics. Instead of resolutions I made goals.

2014’s Goal List had 5 goals on it. I achieved all of them and hand wrote 3 more on to the list and knocked them all out of the ball park too. 2015’s Goal List was a bit more difficult. I started to create immeasurable, open-ended goals as well as my tick-off-able, measurable goals. These included things like “work on my strength” and “practice mindfulness”. You can’t really measure those things because they’re constantly moving goal-posts with no real end. There’s always room for improvement.

The initial draft of the 2016 Goal List was a spectacular failure. By about April I had called quits on Uni, resigned myself to a dramatic levels of misery and crossed the whole thing out.

I was so disheartened and angry at myself I even managed to spell “Utter” incorrectly. It was truly an utter failure. (Well done. Good job.)

A friend made me create a revised list considering we were only a few months in to the year and no one (specifically those closest to me) wanted to deal with a depressed me. I managed to achieve favourable outcomes on the new list, despite there not being very many measurable goals. 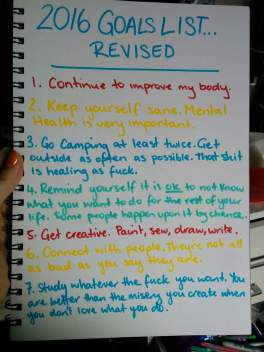 Towards the end of the year I had created a subset of goals that were measurable (strength, fitness and weight related mostly), and I have also managed to cross off a few of the original 2016 Goal list too. (“Do something that scares me”- NAILED IT! [I fell in love, but I’ll tell you about that another time])

I found that once I had created immeasurable goals that forced me to focus on my mental health and my own happiness I handled the disaster that was 2016 with a lot more grace and kindness. My self-evaluative goals made me a much more pleasant person to be around and in the long run has resulted in better relationships with the people around me, both in my personal and professional lives.

The goal list for 2017 is a long one. At 21 items, with more than half of them being open-ended, flexible, and immeasurable, a vast majority of the goals will be rolled over and reevaluated in 2018, even 2019.

These larger goals also allow for a subset of smaller goals to be worked in to them to break them down in to bite-sized, achievable goals. “Connect with  people; Friends old and new” allows for a subset such as “Text a friend I haven’t spoken to in a month.” Which leads to “Make plans to see them.” Which follows with (and forces goal 1 to come in to effect) “Actually stick to the plan and see them”.

I like the mindset change having a goal list over NYR creates. I found because I started with just a few purely measurable goals I’ve been able to graduate over the years to more flexible, continuous goals without getting disheartened. I’ve learned and taught myself to be OK with slow progress as long as I’m progressing. Some people may be able to just jump right in with a long list and a lot of unlimited and flexible goals, but I couldn’t; and I don’t know many people who could either. Remind yourself that it’s OK to start small. You just have to start.

One thought on “Entering the New Year”